A Relentless Sequentiality, One Damn Slide After Another: Edward Tufte’s The Cognitive Style of PowerPoint 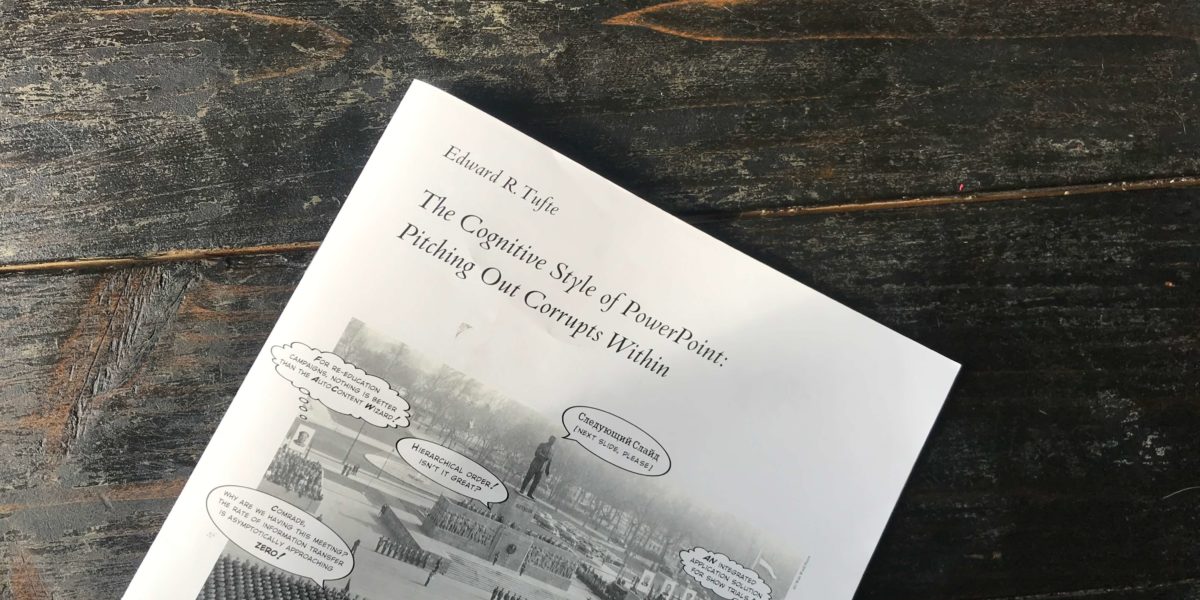 Buy it on Amazon

“What is the problem with PowerPoint? How can we improve our presentations?”

What began as a tool for helping high-level presenters organize their thoughts into concise lists of bullets has become the global standard for creating presentations, and the officially official language of business communication. It seems like every week, there’s a new article on LinkedIn heralding The End of PowerPoint As We Know It, an end that never seems to draw nearer, so much as it just looms out on the horizon at some indeterminate distance.

Edward Tufte has been criticizing PowerPoint since before it was cool. While he acknowledges that the world “turns out billions and billions of presentation slides each year”, Tufte, known worldwide as the guru of information visualization, sees PowerPoint as a flawed presenter-oriented—not audience-oriented tool:

PowerPoint’s convenience for some presenters is costly to the content and the audience. These costs arise from the cognitive style characteristic of the standard default PP presentation: foreshortening of evidence and thought, low spatial resolution, an intensely hierarchical single-path structure as the model for organizing every type of content…This cognitive style harms the quality of thought for the producers and the consumers of presentations.

The Cognitive Style of PowerPoint: Pitching Out Corrupts Within—more pamphlet manifesto than PowerPoint how-to book—is a well-argued wake-up call for those who may have fallen into relying on the same-old suboptimal presentation tropes. Like CinemaSins for PowerPoint, Tufte breaks down bulleted lists, chart “Phluff”, random builds, and other “sins” that can work against the storyteller’s intention to convey depth and meaning. He pulls examples of ineffective slides with a poorly-designed template from the Harvard School of Public Health, and analyzes slides filled with bulleted lists that frustratingly obscure the story of NASA’s investigation of the tragic final flight of the Columbia[footnote]PowerPoint Does Rocket Science[/footnote].

Tufte characterizes PPT as low-resolution, thin, and content-free. Comparisons to the nearly nonexistent data density of children’s books, and of propaganda such as Pravda[footnote]Referring to the official newspaper of the Communist Party of the Soviet Union, not Elon Musk’s journalism project. Means “Truth”.[/footnote], with the presenter as the Great Leader on the pedestal lecturing their passive audience, drives the point home.

The Real-World Limitations of a PowerPoint Slide

However, we’re using PowerPoint under some very real-world constraints: space (on-screen or on-paper real-estate), and time. Only so much information will meaningfully fit on-screen or on an 8.5″ x 11″ sheet of paper, and you can only keep a C-level audience’s rapt attention for so long (somewhere on the order of seconds, in my experience…).

But to Tufte’s point, in the interest of brevity and whitespace, are we abbreviating the truth to ensure the words fit into their allotted box on the page? What information is being left out?

Like Tufte, when it comes to designing slides for our clients, I’m inspired by books. And what’s the difference between a PowerPoint slide, and the page of a book? Time.

During presentations, I’m using prose, charts, graphs, high-level photography, iconography—and yes, occasionally, tasteful animation and builds—to prompt the presenter, quickly and viscerally illustrate the story, and keep the audience engaged. A big impact, meaning, a quick transfer of information and insight from the presenter to the audience, has to be made in a short time so that everyone can get on to their next meeting (during which they’ll consume more slides—make sure they remember yours!).

But for reports, especially when designing PowerPoint reports for market research, sales, investments, and others, we’re telling data-dense and compelling stories with the luxury of time. Prose can get a bit longer and more in-depth. Data can be a bit more exhaustive. With books, time is infinite—you can take as long to read the book as you want. Similarly, our clients might consume reports on their own, at their own pace (and as Tufte says, “people can read 3 times faster than presenters can talk) while sipping their morning coffee. Tufte appears to advocate for using reports as presentations—imagine presenting slides with the information density of a book, for example—for certain technical or scientific audiences, that could work well, but I think that would frustrate CEOs or CMOs. One-pagers are great for bridging the gap between presentations and reports, giving you the robustness and depth of a report on one impactful and easy to consume page.

Until the End of PowerPoint As We Know It is finally upon us, PPT is the standard tool of choice for business communication. And while I agree with much of Tufte’s criticism of PowerPoint and his analysis of its limitations, I disagree that it can’t be used for Serious Presentations in the hands of a designer who can expertly create compelling slides that work within—and even transcend—those constraints.

For those of us who use PowerPoint daily, The Cognitive Style of PowerPoint is a quick read that will help spark some ideas on how you can orient your decks toward your audience’s needs: honest and credible, information-dense yet impactful, clear and beautiful.

Have you read the book? What do you think? Check in with a comment below to let us know!

PowerPoint is a registered trademark of Microsoft.

Slidedesignr is an independent service company and is in no way affiliated with Microsoft Corporation.